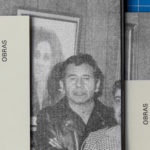 Obras is an archive project zine published for the XII FEMSA Bienal. Obras explores the need politicians have to document their use of public resources in infrastructure.