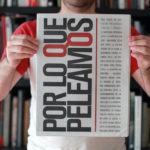 Por lo que Peleamos/ What we fight for

Por lo que Peleamos/ What we fight for

Description: “Space is the new arena for political debate. Within space, disagreement takes shape and ideologies, authoritarianism and democracy come to life. Its importance does not lie on a post-colonial kind of control over land, but on the fact that it creates, or rather recreates, certain links. As a result, rather than referring to a location that we can pinpoint with coordinates or to the concept of location, space, as Henri Lefebvre puts it, is a three-dimensional entity, it is concrete matter –here- and it is an idea – what here means-, but, above all, it is a social practice – what I do here. Thus, when talking about conflicts over a certain space there is much more than a mere fight over a piece of land. Deep down, disagreements are based on the type of link that we want to create with a certain place. In that sense, by defending a certain space we are exercising our right to create realities.” Ximena Peredo