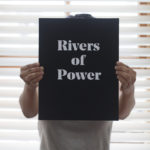 Description:”Rivers of Power and its mix of archive images, blurred film/tv news stills and outstanding photography is beautiful to look at even though the subject matter is – as always in Alejandro’s work – quite disturbing”. Elsewhere A journal of Place

Designed and edited by Alejandro Cartagena and Fernando Gallegos
Introduction by Ximena Peredo
Essay by Gonzalo Ortega
Editorial design by Communal
Co Published by NEWWER and Alejandro Cartagena
Softcover in Box
In a Case with signed print
144 pages,
23x30cm
Printed in Spain at Palermo
Prepress by La Troupe
ISBN 978-0-9966697-1-9