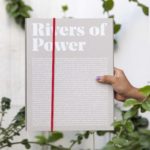 Rivers of Power By Alejandro Cartagena

Description:”It’s a great book in which you’re immersed in a full range of different images from different sources. There’s also the sense that the books Cartagena makes, as well as being works in themselves, are also punctuation marks in a larger body of work that he’s already semi-visualising in his photobooks, that the books, though great, are just a stepping stone to some huge installation that will one day take up a couple of floors of one of the world’s major museums. There’s a feeling that the book isn’t everything, that the book is just the beginning”. Colin Pantall