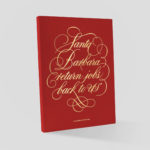 Description: “…Through this narrative Cartagena conjures the sense of a place, which has the air of an ambiguous borderland, a porous place where culture and people flow. Whether it is between north or south, or past and present, is difficult to say. It is a place where the idea of concrete identities, nationalities and strictly delineated borders seem like a nostalgic dream or a relicfrom the past superseded by a new and very different reality – a place where the topography is treacherous, the present uncertain, and the future, even more so”. LEWIS BUSH for 1000 Words